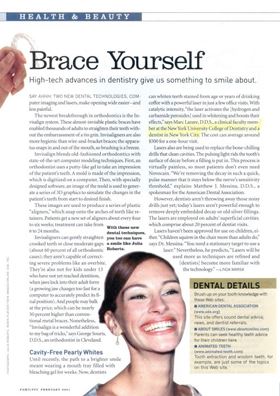 The newest breakthrough in orthodontics is the invisalign system. These almost-invisible plastic braces have enabled thousands of adults to straighten their teeth without the embarrassment of the tin grin. Invisaligners are also more hygienic than wire-and-bracket braces, the apparatus snaps in and out of the mouth, so brushing is a breeze.

Invisalign blends old-fashioned orthodontics with state-of-the-art computer modeling techniques. First, an orthodontist uses a putty-like gel to take an impression, which is digitized on a computer. Then, with specially designed software, an image of the mold is used to generate a series of 3D graphics to simulate the changes in the patient’s teeth from start to desired finish.

These images are used to produce a series of plastic “aligners”, which snap onto a arches of teeth like retainers. Patients get a new set of aligners about every four to six weeks; treatment can take from 6 to 24 months.

Invisalign can gently straighten crooked teeth or close moderate gaps (about 60 percent of all orthodontic cases); they aren’t capable of correcting severe problems like an overbite.

They’re also not for kids under 13 who have not yet reached dentition, when jaws lock into their adult form (a growing jaw changes too fast for a computer to accurately predict its final position). And people may balk at the price, which can be nearly 50 percent higher than conventional metal braces. Nonetheless, “Invisalign is a wonderful addition to my bag of tricks.” Says George Souris, D.D.S., an orthodontist in Cleveland.

Until recently, the path to a brighter smile meant wearing a mouth tray filled with bleaching gen for weeks. Now, dentists can whiten teeth stained from age or years of drinking coffee with a powerful laser in just a few office visits. With catalytic intensity, “the laser activates the (hydrogen and carbamide peroxides) used in whitening and boosts their effects,

“says Marc Lazare, D.D.S., a clinical faculty member at the New York City University College of Dentistry and a dentist in New York City City. The cost can average around $500 for a one-hour visit.

Lasers are also being used to replace the bone-chilling drills that clean cavities. The pulsing light rids the tooth’s surface of decay before a filling is put in. This process is virtually painless, so most patients don’t even need Novocain. “We’re removing the decay in such a quick, pulse manner that it stays below the nerve’s sensitivity threshold,” explains Matthew J. Messina, D.D.S., a spokesman for the American Dental Association.

However, dentists aren’t throwing away those noisy drills just yet; today’s lasers aren’t powerful enough to remove deeply embedded decay or old silver filling. The lasers are employed on adults superficial cavities, which comprise about 20 percent of dentist visits.

Lasers haven’t been approved for use on children, either. “Children squirm in the chair more than adults do,” says Dr. Messina. “You need stationary target to use a laser.” Nevertheless, he predicts, “Lasers will be used more as techniques are refined and (dentists) become more familiar with the technology.” – LINDA MARSA