If you want an attractive, healthy smile… put out that cigarette. 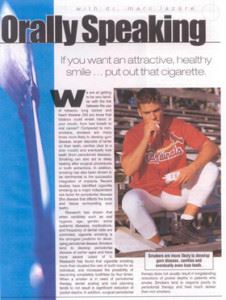 We are all getting to be very familiar with the link between the use of tobacco, lung cancer and heart disease. Did you know that tobacco could wreak havoc in your mouth from bad breath to oral cancer? Compared to non-smokers, smokers are many times more likely to develop gum disease, larger deposits of tartar on their teeth, cavities (due to a drier mouth) and eventually lose teeth (from periodontal disease).

Smoking can also act to delay healing after surgical procedures or tooth extractions. In addition, smoking has also been shown to be detrimental to the successful integration of implants. Recent studies have identified cigarette smoking as a major independent risk factor for periodontal disease (the disease that affects the bone and tissue surrounding your teeth).

Research has shown that when variables such as oral hygiene, age, gender, some systemic diseases, medications, and frequency of dental visits are controlled, cigarette smoking is the strongest predictor for developing periodontal disease. Smokers tend to develop periodontal disease at earlier ages and have more severe cases of it. Research has found that cigarette smoking more than doubled the rate of tooth loss for an individual, and increased the possibility of becoming completely toothless by four times.

The Centers for Disease Control and Preventions (CDC) have conducted several comprehensive studies; the most recent data indicated that smokers were four times as likely to develop periodontal disease, and former smokers were 1.7 times more likely than nonsmokers. For current smokers, there is a dose-dependent relationship between cigarettes smoked and the likelihood of developing periodontal disease. For example, if someone smoked nine or less cigarettes per day they were 2.6 times as likely, whereas if they smoked 31 or more, the odds increased to almost six times.

Cigarettes not only affect the teeth and their surrounding structures, but they act to suppress the immune system, decreasing one’s ability to fight off infections and disease. Oral cancer is diagnosed in an estimated 30,000 Americans per year and causes close to 8,000 deaths per year (JADA, August 2000).

Approximately 75 percent of these cancers are attributed to the use of tobacco (primarily cigarette, pipe and chewing tobacco and snuff are the two main categories of smokeless tobacco. Their use has been well established as a cause of oral cancer. Tobacco is considered to be the single most significant initiator of the development of oral squamous cell caronoma.

It has been estimated that Americans spend over $50 billion each year on direct medical care for smoking-related illnesses. This seems a bit outlandish considering tobacco is the single most preventable cause of disease and death in the United States.

Despite increase public awareness and tobacco cessation products, more than 25 percent of Americans still smoke, and many more are involuntarily subjected to secondhand smoke. On May 25th 2000, the Surgeon General’s report stated, among its major findings, that lifestyle behaviors that affect general health, such as tobacco use, excessive alcohol use, and poor dietary choices, affect oral and craniofacial health as well.

Since 1954, oral cancer and tobacco have been linked. Evidence relating pipe smoking and lip cancer was also established. Effects of tobacco on gingivitis, periodontal disease, nicotine stomatits malignant oral lesions and tobacco association reported in 1974. Alcohol found to work synergistically with tobacco reported in 1060. Dose response reported in 1984. Bye 1956 all types of tobacco products (cigars, cigarettes, pipes and smokeless tobacco) were implicated in the development of oral cancer.

The dental profession, as a whole, has become increasingly more aware of the detrimental health effects of tobacco, and has begun to take measures to stop its use. Recent surveys show that dentists are becoming involved in tobacco cessation activities, and many feel that it is their duty to encourage and assist their patients to and or at least limit their tobacco use.

Dentists are also in a good position to help prevent the initial or continued use of tobacco by children and adolescents through positive anti tobacco messages. Dentists should advise teens or young adults to quit, citing reasons that include reduced athletic ability, mouth odors, and stained teeth in addition to educating them on the risks of lung cancer, oral cancer and heart disease.

Since people tend to visit their dentist more regularly than they see their physician, the dentist should accept the role of the primary educator on the harms of tobacco use.